skip to main | skip to sidebar

Sail away with me to another world.

I don't mean to get too YouTube-heavy on you here, but my idol Leslie Hall of Leslie and the Ly's (aka The Keeper of Thyn Gems) has finally performed a cover. In a Nashville mall's video karaoke booth. With a guy who is a regular there. Heaven.

P.S. Leslie and the Ly's will be playing at the Abbey Pub on Friday Sept. 29 as part of Estrojam this year with Fannypack and others. My ticket will be waiting for me at Will Call. Will yours?

P.P.S. If you are intrigued by Leslie and a fan of the Internet (and earworming jams about the Internet), do yourself a favor and check out the videos at We Are the Web. Fun work for a great cause.
Posted by Lobstar at 12:02 AM No comments:

Jesus H! It's taken about 40 hours for me to make this post now that Blogger Beta is making things CRAZY!!!

Posted by Lobstar at 1:07 PM No comments:

Ban you so hard.

I've long thought of having some sort of cover contest a la Songfight / Coverfight where readers could submit a cover of my choosing and I'd pick the best one. Or maybe I'd have readers vote via some kind of poll, but that seems like a lot of work I don't want to do. Heh. I wouldn't have much to offer in the way of prizes anyhow, so I'm okay with surrendering the dream.

But if I were going to host a cover contest, I think I've found the first contender. I'd want English (or Spanish, French or Italian) versions of the following insane song, a parody version of which is inexplicably No. 2 in Netherlands right now (that parody version appears to be about a boat, not a bot, but the bot version rules harder—I'm usure which came first*):

Boat or bot, It's obvious anything can hit the charts in Europe.

No need to submit entries, but you totally know you want to!

Do what I please, gonna spread the disease because I wanna.

Posted by Lobstar at 3:46 PM No comments:

Before a million people comment telling me about it, I should probably go ahead and do what everybody's doing and link you to DJ Gyngyvytus's Skeet Spirit: A Crunk Tribute to Radiohead. [Note: The downloads are .rar files and you will need a program like WinRAR to open it. If you don't have WinRAR, you can get it at www.download.com.]

All of our time spent keeps us alive.

It doesn't happen very often, but I do get in a hard-rock/metal mood from time to time. As someone who collects covers, this is a good mood to be in, as the ratio of metal covers to non-metal covers is approximately 15:2.

There are details about my past that newer friends are often shocked to learn about me. One of them is my history as a hard-rock/glam-metal fan, which at times overlapped with my new-wave/alternative/indie periods. In high school/college, I saw a slew of concerts performed by the likes of Bon Jovi (four or five times), Poison, Motley Crue, Guns N' Roses. Not to mention seeing Skid Row at least three times opening for said acts. I mean, just look at me my junior year: 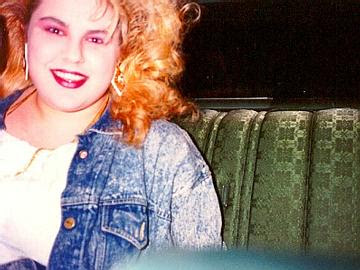 My hair could have totally beaten up your hair.

No, I've never met anyone quite like you before.

Let's all hope my bandwidth hold up so you can grab today's covers!

See my helpful list of Disclaimers and Reminders after the Blog Roll and Other Links.

1. MP3s on this blog are available for a short time and are here for sampling purposes only. My only goal is to share my love/hate relationship with cover songs and to turn readers on to artists of whom they might not have otherwise been aware. If you are the creator or copyright owner of a song or anything else that might be posted here, please CONTACT ME by sending an e-mail (see above) if you wish to have it removed.

2. PLEASE don't direct link to any individual tracks. If you like an artist you hear here (either the original artist or the one performing the cover), you should definitely do your best to take the knowledge you gain here and go out and BUY THEIR ALBUMS.

3. I very rarely, if ever, repost songs. If you missed something, I apologize, but I get lots of e-mails from people asking me to repost things. If I actually reposted all the tracks people wanted me to, I'd never get a chance to post anything new. That said, if there is A TRACK OR TWO you feel you desperately need, feel free to drop me a line at liza.copyright @ gmail.com (sans spaces) and I'll do my best to get it to you. But please keep in mind that it might not be instantaneous, as I get approximately 600 e-mails a week.

4. If you read my updates via an RSS feed aggregator or via a LiveJournal feed, there will be times when old posts will suddenly appear with non-working links, which happens as a result of my going back to an older entry to remove the links or to update or edit the post in any way. Again, I apologize if you missed these posts initially, but I cannot repost the songs. Lately I've been keeping songs up for two weeks to a month and I feel that should be plenty of time for you to get the songs. If you don't read your feeds often and regularly miss tracks, I suggest you bookmark the site and check it once a week or so.

5. I do not generally take requests nor do I guarantee that songs submitted to me will appear here. You're welcome to send me a track or two, but it might not hit the blog. Also, I get LOTS of e-mail so submissions sent via sites like YouSendIt or Dropload.com often expire by the time I get to them. Please attach your files to the actual e-mail if you want to ensure I get it. Similarly, I'd really appreciate it if those of you sending MP3s to my inbox would check to see whether or not I've already posted the tracks first. There is a search bar in the upper left corner of the site that should assist you in said endeavor. Granted, chances are good that even if I've not posted it, I already have it, but at least there's a chance I don't.

6. If you're looking for a few suggestions on beginning your own cover hunts, here is an old entry that might prove helpful.

7. If you are a member or agent of a band, please keep in mind that I ONLY POST COVER SONGS. Similarly, I do not "review" albums. I will most likely delete and ignore any communication from you that shows you do not understand this.